Is There a British Chalcolithic? 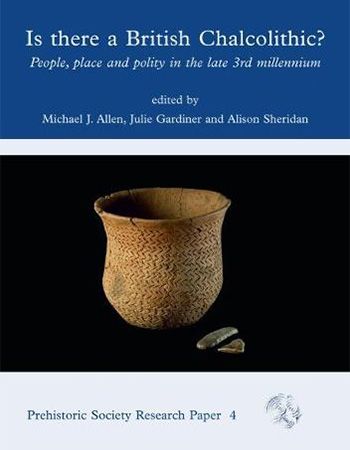 This volume brings ther many leading authorities in 20 papers that address the question 'Is there a British Chalcolithic?' (c. 2450/2400–2200/2150 BC). This question was posed at a conference of the Prehistoric Society held in April 2009 and the volume contains a selection of key papers presented on that occasion, together with a number of commissioned additional contributions. The volume does not present a consensus view; rather, it has provided contributors with the opportunity to examine in depth a range of materials, issues, and themes, and to show just how much new information (particularly chronological and isotopic) has come to light in the last decade. The diversity of views expressed in these papers as to whether we should adopt a 'new' period classification for British Prehistory – i.e. the Chalcolithic or Copper Age – reflects the lively debate that surrounded this question during the conference.

The first four papers address the key subjects of definition, issues, and debate, with two advocating the use of the term 'Chalcolithic' and two rejecting it. Stuatr Needham debates how the definition and labelling of this period are essential because it does mark a time of social and cultural change, distinguishable from what went before and from what happened once bronze began to be used while Ben Roberts and Catherine Frieman examine the concept of a distinctive British Chalcolithic from the perspective of the metal evidence, as viewed against the continental Chalcolithic evidence and against their critique of the concept of a continental 'Chalcolithic frontier', argueing against the introduction of this period label for Britain. Alison Sheridan examines what we can and cannot say about traditions, practices, social relations, and external contacts during the period between the 25th and the 22nd centuries BC, highlighting the outstanding research questions and the approaches that are needed to address them period needs to be defined on its own terms. Peter Bray presents a chemical and chronological analysis of the British and Irish metalwork of the second half of the 3rd millennium, in an attempt to explore how metal was viewed and used by the people who lived here. He argues against the use of the term 'British Chalcolithic'.

In the second group of papers Marc Vander Linden discusses the possible impact of copper on the cultural and social history of Britain and Ireland, reviewing evidence from both sides of the Channel. Martin Bartelheim and Raiko Krauss discuss how, in large areas of Europe, the appearance of metals occurred within a period of rapid evolution of technology, economy, society, and settlement structures and was closely linked with the emergence of a complex economic and social organisation, a defining factor for the Chalcolithic. Volker Heyd describes how a long-term and ongoing evolutionary progress is attested for prehistoric Europe between the mid-5th and late 3rd millennium BC. The Europe-wide Bell Beaker Phenomenon was the apex of an ideological domination which completed the process of the Chalcolithisation of Europe. Harry Fokkens takes a closer look at the the relationship between the Netherlands and Britain by revisiting the question of Beaker migration and the transmission of ideas and material culture in the light of recent finds and radiocarbon dates while Tobias Kienlin questions our approaches to understanding early metalworking, arguing that notions of progress and evolution we use to account for long-term technological change falls short of representing a more complex ancient reality.

The third section presents a series of detailed case studies from various parts of Britain and Ireland. Frances Healy discusses the Baysian modelling of radiocarbon dates for articulated inhumations of the 4th–2nd millennia in England, demonstrating that Beaker burials of the later 3rd millennium seem to reflect a newly introduced continental tradition, rather than the revival of a long-lived insular one. The late Ian Shepherd examines the evidence for a Chalcolithic period in Scotland, reviewing funerary practices, metalwork, and pottery evidence to argue for a geographically extensive beginning to the 'Beaker Phenomenon', with subsequent regionalisation highlighting differing responses. Steve Burrow reflects on the lack of prominence afforded to Wales despite its pivotal position between Ireland and other hotspots of late 3rd millennium BC archaeology and uses 89 radiocarbon determinations to address various themes, concluding that the evidence is currently insufficient to allow for a clear definition of a Welsh Chalcolithic. For Ireland, Neil Carlin and Joanna Brück examine settlement and ceremonial sites, mortuary, and depositional practices to illustrate strong evidence for continuity between the Late Neolithic and Early Bronze Age arguing that metal actually had a very limited role in initiating and creating social change and that the term Chalcolithic is inappropriate in an Irish context. William O'Brien, in contrast, considers that the distinct period of metal production and use in Ireland from the 25th century was marked by a widespread adoption of copper and gold prior to the introduction of tin-bronze metallurgy, and that the concept of a Chalcolithic is entirely relevant.

Mandy Jay and her collaborators on the Beaker People Project are investigating mobility, diet, environment, and subsistence for the Late Neolithic to Early Bronze Age population of Britain using particularly isotopic analysis of bones and teeth. Preliminary results are presented mainly for individuals in Scotland and east Yorkshire. Various levels of mobility appear to be indicated and the general diet excluded significant levels of marine and other aquatic resources. Neil Curtis and Neil Wilkin report on the results of the complementary Beakers and Bodies Project, which focuses on individuals from parts of Scotland. They present several narratives/models to aid in understanding regional socio-cultural identities, changes, and networks of interaction during the Chalcolithic in this part of Britain. Alexandra (Lekky) Shepherd presents the evidence for patterns of body orientation and Beaker style among the crouched inhumations of the British Chalcolithic–Early Bronze Age, demonstrating predominant gender-defined burial patterns.

The final three papers in the volume look at the wider issue of the relationship between the economic, monumental and funerary use of landscape. Mike Allen and Mark Maltby review geoarchaeological data and animal bone assemblages to provide some indications of significant, though subtle, changes that occurred as a result of, and during, the Beaker period. There is clearly an increase in farming, and changes in animal husbandry practices. Paul Garwood examines the spatial distribution and frequency of early Beaker burial events in Britain from a landscape perspective to show how a series of distinctive spatial strategies articulated relationships among monuments, spaces, people, and practices. Rosamund Cleal and Josh Pollard conclude the volume by revisiting and reviewing sequences in the Stonehenge and Avebury landscapes.They argue for a 'long view' – that the appearance of Beaker-associated metal needs to be understood in the context of a series of changes and developments with their origins in the preceding centuries, and which continue into the full Early Bronze Age.