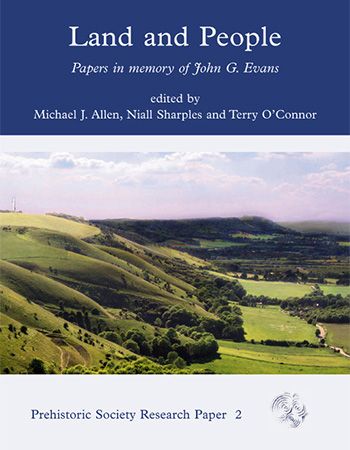 This volume brings together papers that address themes and landscapes on a variety of levels. They cover geographical, methodological and thematic areas that were of interest to, and had been studied by, John Evans. In some instances papers will be seen to have been inspired by John’s approaches to landscape and landscape analysis and their application to new or wider areas than John himself studied in detail. Others take forward, re-examine or elaborate on some of his specific theories and interpretations, looking at new or improved datasets. As a collection, the papers in this volume provide a diverse but cohesive picture of how archaeological landscapes are viewed within current research frameworks and approaches, while also paying tribute to the innovative and inspirational work of one of the leading protagonists of environmental archaeology and the holistic approach to landscape interpretation.

Divided into five sections which echo themes of importance in British prehistory, and that were of direct interest to John Evans, this volume presents a range of papers examining people’s interaction with the landscape in all its forms. It is largely an archaeological discourse, using the results from environmental archaeological analysis, and perceptive enquiry to re-examine many common facets of archaeology.

In the first section, following an appraisal of John’s contribution to archaeology, three papers examine aspects of environmental archaeology, experiments and philosophy. Here Terry O’Connor examines the environment in which people lived as a product of human social and cultural decision making and indicates that the void between those studying people, objects and artefacts, and those studying the broader canvass in which they lived should not be allowed to exist academically. Changing significances and values of structured approaches to experimental archaeology are elucidated by Martin Bell. In a contrast of styles, Steve Mills eloquently shows, largely via the transcript of a video, John and colleagues interacting with the landscape, sampling and knapping flints, and considering aspects beyond the mere practical and pragmatic.

The nature of woodland on the chalklands of southern England and the archaeology of the chalk are generally considered to be arenas and themes we understand and which offer few opportunities for further insightful investigation. Five papers dispel these myths. The fact that woodland was not a uniform blanket across the chalk is demonstrated by Allen and Gardiner, who show that natural openings and variation in that woodland led to the centres of early prehistoric activity that became foci of major Neolithic landscapes. In a similar vein, but by examining prehistoric soils, Charly French contrasts the fen-edge of Cambridgeshire with the chalk landscape of Cranborne Chase. He shows that the variability of the soils mantling these areas also provide important enabling and constraining parameters for prehistoric activity, and echoes comments by Terry O’Connor earlier in the volume. The importance of understanding the precise nature and spatial definition of woodland is clearly shown by Paul Davies and Neville Gardner who only provide reasons but also mechanisms, for doing so. Two papers examine specific chalkland landscapes; Frances Healy takes the Hambledon Hill environs and discusses it in its broader environmental context, while Julie Gardiner and Mike Allen look at pathways, viewsheds and Prehistoric Society Research Paper 2 communication routes which provide a framework for prehistoric activity within and across the Wyle valley, Wiltshire.

Coasts and islands are examined at Gwithian (Jacky Nowakowski), Orkney (Jane Downes), St Kilda (Andrew Fleming) and the Western Isles (Niall Sharples) from a range of different perspectives. Bronze Age barrows are discussed as cultural expressions in the Orcadian landscape, while settlement in the Beaker period is reviewed for the Western Isles, and St Kilda is taken as an example with which to study the concept of ‘islandness’.

Snails and shells were a strong part of John Evans’ career – but unless the data derived from them has real value in aiding with interpretation of archaeology and the action and activities of human communities then their relevance is large undermined. Four papers show how the value of the ecology and economy of snails and shells provide important information for understanding how communities lived, operated and engaged with their local environment. Terry O’Connor and Jane Bunting examine prehistoric wetland plant and molluscan evidence in Orkney; while Speller, Preece and Parfitt examine Roman snails, sediments and small mammal bones from the Roman villas on the Isle of Wight. Change and continuity across the Mesolithic-Neolithic transition are examined by Nicky Milner and Oliver Craig using midden sites in Scotland, while Mark Robinson demonstrates the significance of the single species of land snail (Ena montana) and uses it to examine the retention and extent of ‘old woodland’ during the Neolithic, in particular in the Thames valley, and its relevance to Neolithic settlement (eg, Yarton).

The volume concludes with three papers examining people, process and social order, commencing with Alasdair Whittle’s examination of texture at the Neolithic sites of Ecsegfalva 23, Arbon Bleiche 3, and Schipluiden – he uses these as a mechanism to think about material textures, sociality, and duration. Richard Jones examines medieval manuring as being more than a question of fertility, but uses it as a way to explore social meaning and the definition of space and social identity. From Greece, Katerina Paschali examines social processes and the bibliography of recent threshing floors.