From Bann Flakes to Bushmills: Papers in Honour of Professor Peter Woodman 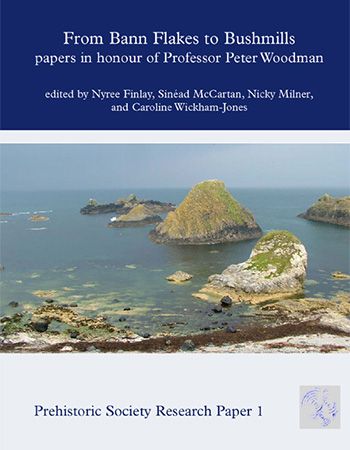 This book is dedicated to Peter Woodman in celebration of his contribution to archaeology. The volume serves to provide a glimpse of the many ways in which Peter has touched the lives of so many. The volume is divided into three parts. The first part presents papers on artefacts and antiquarians. Peter Woodman’s interest in antiquarians and the material they collected began early on. Six papers are included which deal with artefacts and finds by antiquarians: Mary Cahill writes about an important and unusual Bronze Age hoard from Kilsallagh; Ann Clarke presents evidence of craft specialisation from coarse stone tools in the Mesolithic of Northern Britain; Nyree Finlay considers microliths and breakage patterns; Thomas Kador writes about his research into rhyolite artefacts in the Mesolithic of County Waterford; Joan Rockley presents a history of the South Munster Antiquarian Society; and Alan Saville considers the significance of some unusual artefacts of probably Mesolithic date which were collected in the 19th century.

Peter Woodman has also always had a passion for fieldwork and part two of the volume presents ten papers on other fieldwork projects, both new sites and sites which have been re-investigated, predominantly focusing on the Mesolithic period. Sveinung Bang-Andersen writes about research into prehistoric reindeer trapping sites in Fennoscandia; Clive Bonsall, Robert Payton, Mark Macklin and Graham Ritchie present new evidence for a Mesolithic site near Oban in Scotland; Chantal Conneller, Nicky Milner, Tim Schadla-Hall and Barry Taylor consider the history of research at Star Carr and present new evidence from recent fieldwork; Marion Dowd considers some unique Bronze Age funerary activity and the use of caves at the Glencurran, Ireland; Killian Driscoll presents new ways of interpreting Mesolithic landscapes and platform structures; Kevin Edwards, Edward Schofield, Graeme Whittington and Nigel Melton consider evidence for a Mesolithic presence on Shetland, including recent work at West Voe; Lars Larsson provides a thorough overview of recent investigations at the important Mesolithic cemetery site of Zvejnieki; Aimée Little writes about her fieldwork and new interpretations on Mesolithic chert quarries in Ireland; Graeme Warren presents information on his fieldwork at the site of Belderrig, Ireland; and Caroline Wickham-Jones considers the archaeological discoveries in Scotland and the settling of islands.

Part 3 turns to the theme of people and animals, and particularly the topic of the Mesolithic Neolithic transition from different angles: an area of research that Peter Woodman has been engaged in over the years. The first paper by Erik Brinch Petersen and Christopher Meiklejohn looks at what they term the ‘Tauber line’ and the evidence of Mesolithic and Neolithic burials and changes in diet in Scandinavia; Bill Finlayson carries out an extensive study of the transition to farming and looks for ways of escaping over-generalised modelling; Michael Kimball, William Showers, Sinead McCartan and Bernard Genna have completed a study of shell seasonality for the site of Ferriter’s Cove, Ireland, considering change at the transition to the Neolithic; Doug Price and Nanna Noe-Nygaard present a thorough scientific analysis of early domestic cattle in southern Scandinavia; and Paddy Sleeman and Derek Yalden review contemporary animal populations in Ireland and consider how these data may be useful as indicators of past environments.