The Beaker People: Isotopes, Mobility and Diet in Prehistoric Britain 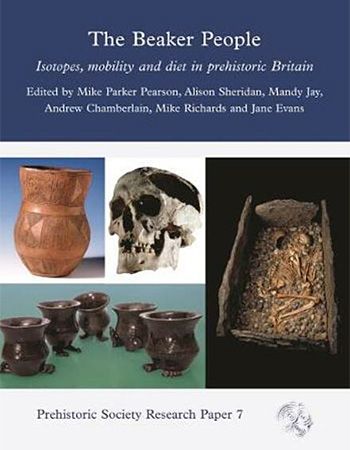 The Beaker People: Isotopes, Mobility and Diet in Prehistoric Britain presents the results of a major project that sought to address a century-old question about the people who were buried with Beakers – the distinctive pottery of Continental origin that was current, predominantly in equally distinctive burials, in Britain from around 2450 BC. Who were these people? Were they immigrants and how far did they move around? What did they eat? What was their lifestyle? How do they compare with Britain’s earlier inhabitants and with contemporaries who did not use Beaker pottery?

An international team of leading archaeologists and scientists, led by Professor Mike Parker Pearson, was assembled to address these questions. Around 300 skeletons were subjected to isotope analysis to explore patterns of mobility and diet, and 150 new radiocarbon dates were obtained. Dental microwear was examined for 64 individuals to provide further information about the food they had eaten, and new information on the sex and age of 201 people obtained. A comparative study was undertaken of the shape and size of Beaker users’ skulls and those of Neolithic people in the Peak District of England, to examine the long-held claim that there was a switch from long-headed to round-headed people with the appearance of Beakers. Tantalising evidence for head-binding among Neolithic people was found.

The range of objects found in Beaker graves was reviewed. In addition, the Beaker People Project was able to incorporate the results of another project, focusing on Beaker users in north-east Scotland (The Beakers and Bodies Project) along with other recently obtained data, including ancient DNA results. Overall, new light has been shed on 369 people: 333 Beaker and non-Beaker users from the core 2500–1500 BC period, along with 17 from the Neolithic and 19 from after 1500 BC. While the genetic data provide convincing evidence for immigration by Continental Beaker users, the isotopic data indicate a more detailed picture of movements, mostly of fairly short distances within Britain, by the descendants of the first Beaker users. This lavishly illustrated book presents a body of data that will be vital to studies of Chalcolithic and Early Bronze Age Britain for decades to come.