Image, Memory and Monumentality: Archaeological Engagements with the Material World 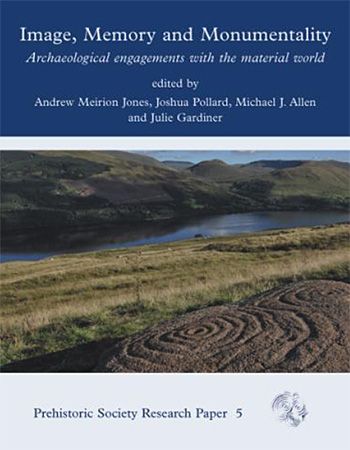 Although this volume is a tribute to Richard Bradley, its strength lies in the range and depth of papers that provide new information, ideas, and interpretations on many familiar archaeological themes. This volume takes, as its basis, the archaeological themes that Richard has developed through his career and has been divided into several sections that, broadly speaking, follow the chronological development of his many fields of interest and are sub-titled with reference to six of his major books (Social Foundations of Prehistoric Britain, An Archaeology of Natural Places, The Passage of Arms, Ritual and Domestic Life, Image and Audience, and Altering the Earth). The papers are, therefore, grouped in meaningful sections, giving the contents a real coherence.

The 'social foundations of prehistoric Britain' are laid in contributions by Mike Parker Pearson on Neolithic Stonehenge and by Colin Richards and Julian Thomas on the Stonehenge landscape before Stonehenge, both derived from the recent Stonehenge Riverside project which has added many more possible layers of interpretation to this complex landscape; and by discussion of small Neolithic monuments along the Upper Thames valley by Gill Hey, and, in the north of country, of henges and their socio-economic setting in north Yorkshire by Jan Harding. Each examines a combination of old and new data to present a discourse between social and monumental landscapes. Martin Green presents some new and unusual burials from Cranborne Chase, the scene of one of Richard Bradley's first extensive prehistoric landscape studies. These papers are complemented by Barrett's insightful examination of the economic archaeology of the Bronze Age to Iron Age transition in Britain, and Andrew Fleming's comments on landscape archaeology and the concept, use, and mis-use of the very term 'landscape'.

The 'archaeology of natural places' is examined by two papers addressing the nature of Neolithic woodlands. Bell and Noble discuss the ecologies of these woodlands and of ecological transformations, while Allen and Gardiner examine the concept of the extent of Neolithic woodland and our assumption that the aim of prehistoric communities was to undertake activities that removed them so as to exploit resources and place monuments in an open landscape. They contend that, perhaps, it was the fact that they were still within woodland that was important.

The section on the 'passage of arms' comprises a group of very different papers. Härke begins it with a discussion of 'conquest ideology' which is defined as an attitude of mind and a set of related practices which explain and justify current social and political conditions with a real or imagined conquest in the past. He considers whether the existence and expression of a conquest myth or ideology can really be identified by purely archaeological means, largely through examination of historical accounts of Anglo-Saxon England and possible interpretations of the adoption of warrior graves and re-use of prehistoric barrows. Woodward and Needham discuss the specifics of the few but exceptional artefacts of an Early Bronze Age individual buried at Wilsford, Wiltshire. Gosden marries landscape and artefacts in an eloquent and imaginative approach through the identification of two different cycles of change in the British Bronze Age and Iron Age relating to the creation of farmed landscapes and the re-emergence of 'ordinary' metalwork in more elaborate and decorative forms after their disappearance in the Early Iron Age. Cleal turns to the Prehistoric Society Research Paper 5 transverse arrowheads of the Neolithic to provide a discourse on the timing and nature of their introduction which was related to a sphere of interaction around the coastal areas of the English Channel and southern North Sea that was maintained through the middle centuries of the 4th millennium cal BC. Edmunds looks at the recent biography of axes, the 'meaning' they still seem to impart thousands of years after their manufacture, and the symbolic referents they have for modern collectors, museum curators and chance-finders alike. Sheridan takes us back to the well-trodden Kilmartin Glen providing an incisive chronological narrative of this evocative and complex monumental landscape between the early 4th and early 1st millennium BC and places it within the broader narrative of developments elsewhere in western Scotland and beyond.

Ian Hodder opens the batting in 'Ritual and domestic life' on the theme of history-making in the Early Neolithic settlement of Çatalhöyük revealing how the process of memory construction can be seen in varied material projects, including house building, burial and the retrieval of skulls and sculptures. He argues that social organisation at the site was based around 'history houses' made up of groups of houses centred on a central house in which the dead were preferentially buried and ritual and symbolic markers were amassed, leading to long term social stability. This resonates with Whittle's contribution which examines the relationship between longhouses and graves of the Linearbandkeramik. He argues that house and cemetery grave were often interchangeable images: the grave, or grave and body, perhaps being seen as a house while the house could have been conceptualised as a body. Howard Williams extends the theme of memory and concepts of death with a discussion of memorialisation of the dead in contemporary Sweden, showing how memory groves create a sense of nostalgia and primordial antiquity and how ashes are used to create different bonds between the living and the dead in association with contrasting material cultures, monumentalities, and landscapes.

In 'image and audience' an international group of leading authorities from Britain, Scandinavia and South Africa take various approaches to the interpretation of rock art and its context. Goldhahn challenges conventional distinctions between the rare rock art images found in closed burial contexts and the more common finds of rock art on outcrops in the landscape in northern Europe, arguing that the interpretation of rock art's significance must be based on manifold criteria, such as its iconography, its structure, its relationship to other prehistoric remains, and its setting in the landscape. Kaul, also iscussing Scandinavian rock art, further challenges recent interpretations and illustrates how ship images could reflect occasional visits of travelers or long distance contacts or expeditions. Lewis-Williams draws parallels between Richard Bradley's work on rock art in Scandinavia and his own on southern African San rock art showing how, in both regions, people believed in a three-tiered cosmos that provided a framework for belief and ritual, and that the rock art in each was concerned with transcosmological travel. Fábregas Valcarce and Rodríguez-Rellán review the interpretation of Galician rock art as an open or hardly-restricted phenomenon, drawing attention to physical constraints that existed on its observation and addressing several controversial issues surrounding the dating of Galician rock art and its precise relationship with the domestic sphere. Such academic debates are also reflected upon by Bacelar Alves, who examines how the research legacy, paradigms of mainstream archaeology and modern science, have shaped current knowledge of rock art in Galicia and north-west Portugal. Beckensall examines recent advances in rock art studies in Britain, reviewing its interpretation, recording, excavation, and theoretical concerns, as well as conservation issues. Finally in this section Peter Skoglund Prehistoric Society Research Paper 5 considers the relationship between people and trees as depicted in Scandinavian Bronze Age rock art and suggests that these images depict manipulated deciduous trees which are not a true-to-life description of people's interactions with trees, but rather ones of rituals where the collection of leaves was a substantial element.

The final section 'altering the earth' begins with David Yates' examination of the possible cosmological orientations of Bronze Age field systems which may have been laid out to marry the earth with the sky, while Chris Evans invites us to evaluate the interpretational framework applied to under-rated excavation data at more than the site and incident level – developer-funded archaeology may have facilitated more recording – but has it fragmented the record? The volume concludes with Aaron Watson's striking pictorial narrative describing four different sites and the different techniques and methods used in their archaeological examination and landscape interpretation.

THE SOCIAL FOUNDATIONS OF PREHISTORIC BRITAIN

AN ARCHAEOLOGY OF NATURAL PLACES

THE PASSAGE OF ARMS