Neolithic Stone Extraction in Britain and Europe: An Ethnoarchaeological Perspective 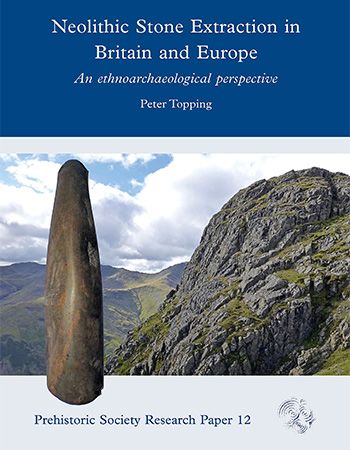 This new title in the acclaimed Prehistoric Society Research Papers series focuses on the introduction of Neolithic extraction practices across Europe through to the Atlantic periphery of Britain and Ireland. The key research questions are when and why these practices were adopted, and what role extraction sites played in Neolithic society.

Neolithic mines and quarries have frequently been seen as fulfilling economic roles linked to the expansion of the Neolithic economy. However, this ignores the fact that many communities chose to selectively dig for certain types of stone in preference to others, and why the products from these sites were generally deposited in special places such as wetlands. To address this question, 168 near-global ethnographic studies were analysed to identify common trends in traditional extraction practises to produce robust statistics about their motivations and material signatures. Repeated associations emerged between storied locations, the organisation of extraction practises, long-distance distribution of products, and the material evidence such activities left behind. This suggests that we can now probably identify mythologised/storied sites, seasonality, ritualised extraction, and the uselife of extraction site products.

The ethnographic model was tested against data from 223 near-global archaeological extraction sites which confirmed a similar patterning in both material records, suggesting it can be used to interpret broad trends in many cross-cultural contexts and time periods.

Finally, the new ethnoarchaeological model has been used to analyse the social context of 79 Neolithic flint mine and 51 axe quarry excavations in Britain and Ireland, and to review their European origins. The evidence which emerges confirms the pivotal role played by Neolithic extraction practices in European Neolithisation, and that the interaction of indigenous foragers with migrant miner/farmers in Britain, Ireland and elsewhere was fundamental to the adoption of the new agro-pastoral lifestyle.

Chapter 1: Traditional models of Neolithic extraction and the need for a new approach

Chapter 2: The emergence of lithic extraction in Europe

Chapter 3: The ethnographic materiality of extraction and its potential archaeological comparators

Chapter 4: An ethnoarchaeological analysis of Neolithic extraction sites in Britain and Ireland

Chapter 5: An ethnoarchaeological analysis of Neolithic extraction site products in Britain and Ireland

Appendix 1: The gazetteer of flint mine and axe quarry excavations