Excavation of a Roman Cemetery, hoard and prehistoric and post medieval remains at Principal Place London 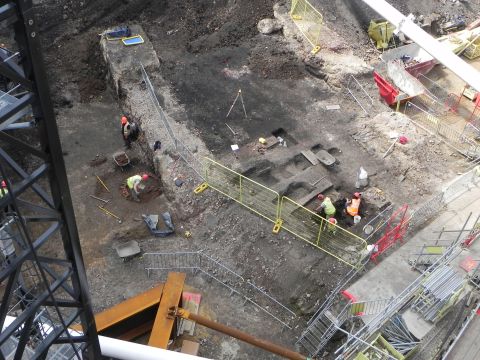 The lecture will present the results of excavations carried out at Principal Place between 2011 and 2016. The site lies in the upper valley of the Walbrook stream and within an area of the northern extramural cemetery of Roman London. Remains on the site included the location of small pits containing pottery of Early Neolithic date from at least 24 vessels. Although the Thames valley and its tributaries, such as the Walbrook, would have been favoured locations for prehistoric occupation, evidence for early prehistoric activity has heretofore been largely restricted to individual finds of flint tools and waste such as Neolithic stone axes as found at Finsbury Circus and Liverpool Street station and a Bronze Age bronze ingot recovered to the west of the site at Clifton Street.  The Principal Place assemblage is highly significant as it is the largest assemblage of its date recovered from the City and its environs. The talk will also focus on the excavation of two areas of Roman cemetery including inhumations, cremations and a large hoard of late Roman coins. The lecture will also discuss the extensive remains of 17th-18th century buildings and yards and remains of the early 19th -century Curtain Road gasworks