Horse domestication as a two-stage process: the latest archaeological and palaeogenomic evidence 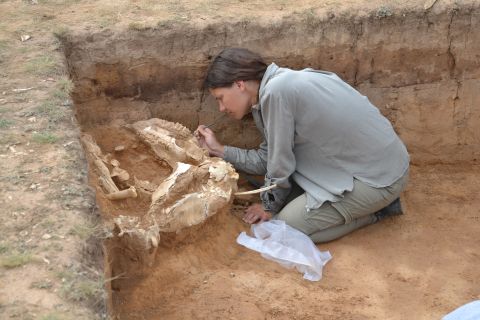 The earliest evidence for horse husbandry comes from the Eneolithic period in Central Asia some 5,500 years ago, yet the widespread use horses for equestrianism across Eurasia spreads rapidly only after 4,000 BP, in the middle Bronze Age. This talk outlines the evidence for the archaeological and palaeogenomic sequence in Central Asia and the Pontic-Caspian steppe leading up to this horizon. It is argued that horse domestication was a two-stage process, initially focussed on localized subsistence pastoralist adaptations, which only later developed into a complete equestrian package that became highly desired across the entirety Bronze Age Eurasia. The lecture concludes with a summary regarding the ancient DNA of a Kent's cavern Ice Age horse and the evidence for the re-introduction of horses to Britain.

Alan Outram is Professor of Archaeological Science and Director of Research at the Department of Archaeology, University of Exeter.

It may be possible to access this event on line. If so a link will be supplied a few days before the event